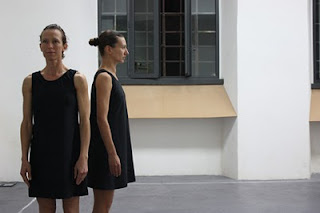 SYBINQ ART PROJECTS, in collaboration with LONDON METROPOLITAN UNIVERSITY, is pleased to invite you to:

SCALA 1:18 a performance by
MARCO DALBOSCO

Italian artist Marco Dalbosco presented the performance Scala 1:18 for the first time as a parallel event at Manifesta 7 (Rovereto, Italy 2008). Setting its contents in the factory ambient and analyzing its obsessive and repetitive production process, the performance involves five women, dressed and combed the same, repeating all the same gestures, steps and sequences enhanced by a projected video of machines at work. The entire operation seems to have a liberating aspect that redeems creativity from job alienation; in fact it focuses, at the same time, on the issue of repeating and modulating mechanisms, set behind the creativity myth. The performers look like they are free, whereas they always come back to the starting point; they become metaphor for our own way of thinking, which sometimes may be constructed and constricted.
Following Guy Debord’s idea of society as a spectacle, instead of turning the production system into a show it is the alienation of the individual, the suspension of a thinking being and the unavoidable conformation of the mass that underline Dalbosco’s work. The choreographer Gloria Ploritch and her students, all from the Italian Northern Region of Trentino, have been working all along with Dalbosco to give shape to this performance, never before presented in the UK.

The exhibition is accompanied by a text by the Curator.

INFORMATION ABOUT THE ARTIST:

GLORIA POTRICH lives and works in Rovereto, Italy, where she teaches Contemporary and African dance at the CDM – Didactic Centre for Music, Theatre and Dance. Her research started from Expressive African Dance passing through Contact and Dance Theatre to arrive to a research-based type of dance characterised with a bond with live music.

SUSANNA BIANCHINI lives and works in London. By using the pseudonym of sybin, she curated various shows and created SybinQ Art Projects, a nomad space devoted to the promotion of exhibition projects, especially with young artists. This is mainly through the commissions of new artworks and the creation of unusual shows settings, outside the so-called “regular” exhibition’s parameters.

This event is possible thanks to the support of the Provincia Autonoma di Trento (IT), Cultural Association Ordine_Sparso (IT), London Metropolitan University and Levent Bozdere (UK).

Welcome to Bergamo #2 for Contemporary Locus

This blog is English/Italian. Click here for English and remember you can also navigate by clicking on the Labels or the Blog Archive.
Invece, per i post in Italiano, clicca qui.

sybin
sybin is a curator behind an all-low-cases acronym. sybin and SybinQ Art Projects aim to promote and support contemporary art through the organisation of shows and the circulation of art culture. SybinQ Art Projects is a space with no physical place where this happens. This is a blog about curating the contemporary, collecting everything related to this experience, and beyond.

ABOUT BEING A CURATOR

The Curator is some kind of Frankenstein who exists in a confusion of identities and disciplinary constructs, given that curating has proven resistant to any notion of academic or professional regulation and is essentially a Paradise of the Improvised - Cuauhtemoc Medina